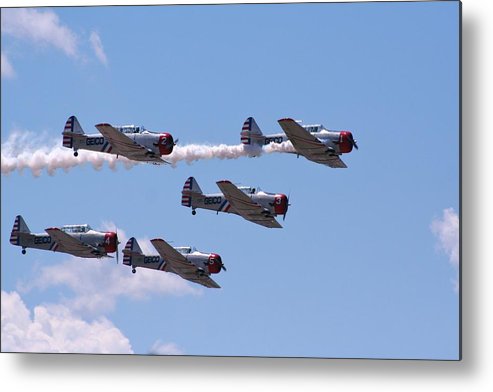 Skytypers metal print by Karen Silvestri.   Bring your artwork to life with the stylish lines and added depth of a metal print. Your image gets printed directly onto a sheet of 1/16" thick aluminum. The aluminum sheet is offset from the wall by a 3/4" thick wooden frame which is attached to the back. The high gloss of the aluminum sheet complements the rich colors of any image to produce stunning results.

The GEICO Skytypers are six vintage World War II planes that perform at air shows. The planes were used to train pilots during the war and are known... more

Fantastic capture of these vintage planes!!...F/L

I love this. Way cool! LFT

Welcome to Inspired By God's Beauty. I grew up, and still live on Long Island. I have been interested in photography since I was a teenager. My goal is to bring the beauty of our Island to everyone. Long Island has many fascinating features: ocean, forests, ponds, rivers, open spaces, and more. I have always believed that nature is a gift from God. It is a picture, a sculpture or painting he has given us. I am inspired by the work he has created for us, Nature. No matter where you go you will find the beauty of nature all around us. The next time you look at a flower, sunset, tree or animal, I am sure you will see something beautiful. I am excited to share my photos with you. Where To Find Me: Twitter @ibgbeauty Facebook...