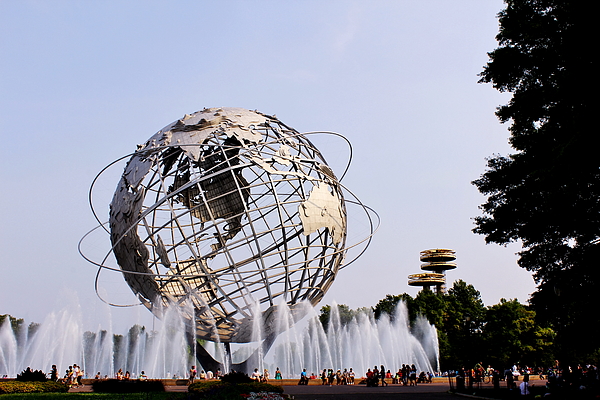 Boundary: Bleed area may not be visible.

Click and drag to re-position the image, if desired.

The image is near the edges of the product but doesn't cover the entire product.   Some of the background color may appear around the outside edges of the image.

Our throw pillows are made from 100% spun polyester poplin fabric and add a stylish statement to any room. Pillows are available in sizes from 14" x 14" up to 26" x 26". Each pillow is printed on both sides (same image) and includes a concealed zipper and removable insert (if selected) for easy cleaning.

The Unisphere was built for the 1964-65 World's Fairs.The three rings around the sphere represent the orbits of the first American astronaut, John... more

Beautiful capture of the Unisphere and fountain! L/F

Congratulations on your recent sale! L/F

Congratulations on your sale!

BLESSINGS on your sale

Congratulations on your feature in the Fine Art America Group "Images That Excite You!"

Welcome to Inspired By God's Beauty. I grew up, and still live on Long Island. I have been interested in photography since I was a teenager. My goal is to bring the beauty of our Island to everyone. Long Island has many fascinating features: ocean, forests, ponds, rivers, open spaces, and more. I have always believed that nature is a gift from God. It is a picture, a sculpture or painting he has given us. I am inspired by the work he has created for us, Nature. No matter where you go you will find the beauty of nature all around us. The next time you look at a flower, sunset, tree or animal, I am sure you will see something beautiful. I am excited to share my photos with you. Where To Find Me: Twitter @ibgbeauty Facebook...